After seven long and fruitful years of using my little Wacom Graphire4 drawing tablet, I finally splurged on a new, larger tablet: the Bamboo Create, also from Wacom. 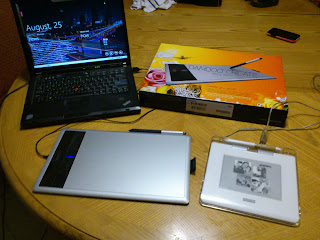 The purchase was a bit of a "yay, first paycheck from new job" gift to myself, in addition to a much-needed upgrade from my small weary Graphire.So far, the Bamboo hasn't failed to impress me: it's thinner, it's lighter, it has a larger drawing surface (my initial reason for buying it), and has one ridiculously nuts, completely unexpected feature: the writing surface also doubles as a touch pad, like a giant laptop touch pad.

It's funny, I was initially disappointed that it lacked a mouse (the Graphire originally came with a mouse; it was the first and last thing to die in the set), but that's because I had no idea that the whole surface became a touch pad.

My only gripe will have to be that, already, the pen nib is showing signs of wear; while it did come with three starter replacement nibs, I've never once had to change the nib on the Graphire. Other than that, though, a solid purchase. 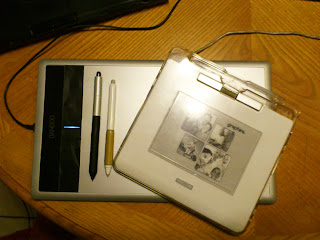 On an odd side note, I'll have to say it felt really good going into Office Depot and buying the highest-end version of the Bamboo on the spot. It's good to have a job again, haha!